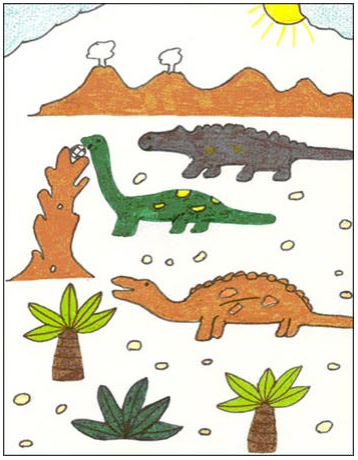 The Lonely Dinosaur
By Henrique Figora

Many years ago dinosaurs were the largest creatures on earth. Some were very large and others small. They also came in many different colors. Behind the fiery mountains was a valley in which the dinosaurs spent the day.
One sunny day the dinosaurs were playing a game of soccer. A new dinosaur that the other dinosaurs had not seen before came walking by. He stopped and watched and then he asked, " Could I play too?"
All of the other dinosaurs looked at him. Together in one giant voice they said " NO!" The reason they had said no to him was because he looked different than the others. He had a long neck and he was green. None of them had ever heard of or seen a long necked, green dinosaur.

The new dinosaur was very sad because everyone said no to him and they even called him 'Greeny'. His feelings were hurt. Slowly he sat down and sadly watched the others play.
Time went by and then suddenly they all stopped playing soccer and they all looked up. One of the dinosaurs had kicked their only ball into a tree. The ball was too high for them to reach.
But it was not too high for the long necked, green dinosaur. He walked over and said to the other dinosaurs, "If I can get your ball down will you let me play with you?" The other dinosaurs decided that it was a good idea. The long necked, green dinosaur reached up with his long neck and he easily got the ball down.

Once again they began playing again. They had a great time playing soccer. The other dinosaurs said they were sorry for not letting him play with them and calling him names.
They had all learned a lesson that day. Even though others may look different we should accept them. We all have something special about us.
The lonely dinosaur now had many friends and they played in the valley for many more years. 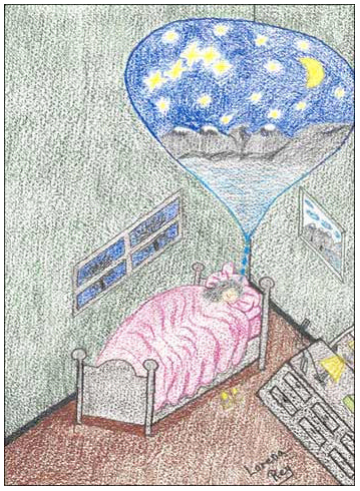